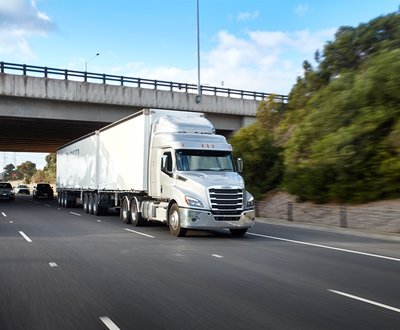 Furniture hauling specialist Williamson Bros is reporting a 20 per cent fuel saving with its new manual Freightliner Cascadia. The Kempsey based company, which runs a 20-truck fleet, opted for an 18-speed manual Eaton transmission for the 13-litre model.

The Cascadia, hauling a B-Double and with a GCM of 40 tonnes, completed its first few trips with a remarkable fuel economy figure of 2.6km per litre.

“It used 160 litres less fuel on a single trip from Kempsey to Melbourne and back compared to the bonneted truck it replaced,” said Damien Clegg, who runs Williamson Bros with his wife Karlie and family.

“That is a significant saving. When you do the sums on the kilometres it does, that actually accounts for a decent chunk of the payments on the truck,” he says.

Williamson Bros, which has depots in Kempsey, Melbourne, Sydney and Brisbane, is the first Australian customer to take delivery of a Cascadia with a manual transmission.

The company made the call to choose a manual based on the preference of driver Darren Campbell, who has been with Williamson Bros for 21 years.

“I’ve driven cab-overs but I do prefer bonneted trucks and I do like manual gearboxes,” Mr Campbell said.

He likes the Cascadia and its performance, but the comfort levels are what impresses him the most.

“It is very comfortable to drive,” Mr Campbell says. “All the controls are close to hand and there is a lot of room in the cab and the bunk, it is really quite spacious,” he added.

The Cascadia features a full suite of integrated safety technology that is new to the conventional truck class, including a radar and camera-based Autonomous Emergency Braking system that can automatically detect, and fully brake for, moving pedestrians in addition to vehicles.

It also has radar-based adaptive cruise control and a lane departure warning system in addition to electronic stability control and a driver airbag.

Williamson Bros also chose to add the optional Side Guard Assist, which uses radar to ‘look’ down the left side of the truck and trailer to detect vehicles, pedestrians and objects in preparation for left turns.

Mr Clegg says he was pleased to have cutting-edge safety features in his company’s vehicles.

“We want to do everything we can to protect our drivers and the community, so it just makes sense to choose the truck with the best safety equipment,” he said.

The 116 Cascadia has a Bumper to Back of Cab (BBC) measurement of 116 inches and features a 13-litre Detroit DD13 six-cylinder, which produces 505hp and 1850lb-ft. A 126 Cascadia with a 126-inch BBC is also available with a 16-litre DD16, which produces 600hp and 2050lb-ft. Both engines meet the stringent GHG17 standard, which exceeds the Euro 6 emissions standard.