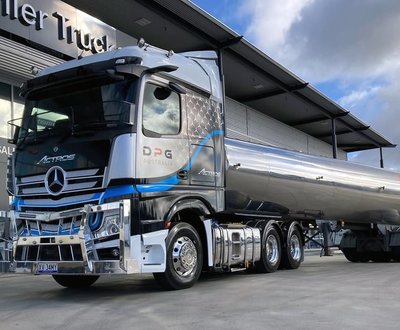 The striking Actros 2663 goes into service for the company's carrer fleet as it sets about distributing some 12 million litres of Euroblue AdBlue annually across manufacturing facilities in Sydney, Brisbane, Melbourne, Townsville, Darwin and Perth.

It was unveiled earlier in the week during a handover ceremony at Daimler Trucks Laverton.

Like all models in the Mercedes-Benz truck line-up, the Actros meets stringent Euro 6 emission standards, which aligns with DPG Australia’s environmental targets.

The company decided to order the new generation truck with the optional MirrorCam feature, after purchasing a previous model Actros three months prior.

DPG Australia Managing Director, Gavin Chapman, was impressed by what he considers to be the truck’s exceptional efficiency.

“It replaced an eight-year-old truck from a different European brand, and straight away we were saving a couple of grand a month,” he said.

“The fuel economy is just brilliant.”

Driver feedback, according to Chapman, was uniformly excellent. It prompted him to take a serious look at the new generation Actros, which has just launched in Australia.

“We got into a new Actros demo and we were just so impressed by improvements that had been made,” he said.

It also introduces the fifth-generation of Mercedes-Benz Active Brake Assist, a radar/camera system, which can now automatically perform full emergency braking for vehicles and pedestrians. Mercedes-Benz has included the ABA system as standard specification in Australia for ten years, and the tradition continues with the new truck.

Chapman was quick to select MirrorCam, the first system of its kind on Australian roads.

“The driver says it takes a while to get used to MirrorCam because it is so new, but that it is very much worthwhile. He says it is 100 times better than regular mirrors in the rain and in the dark,” he said.

The Daimler Trucks Laverton team also organised the build-up of the truck.

Its stunning black, blue and silver colour scheme has been inspired by the dominant Mercedes-Benz AMG F1 team.

“Daimler Trucks Huntingwood decked-out one of their Actros demos in the colour scheme and it looked so good that I wanted that for our truck,” said Chapman.

DPG Australia delivers Euroblue AdBlue in bulk to major transport companies as well as some petrol retail locations, but also offers AdBlue in a range of smaller sizes ranging from 1000 litre IBCs down to five litre containers.