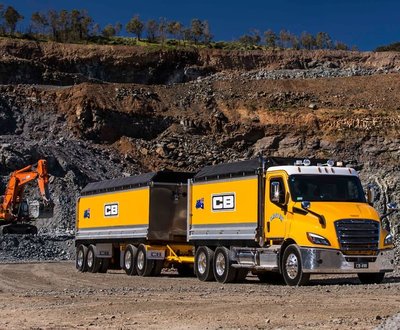 When New South Wales operator Cleary Bros Transport went hunting for a new bonneted truck for its distinctive canary-yellow fleet, Freightliner's new Cascadia got the nod for many reasons, but especially for its safety.

With autonomous emergency braking, lane departure warning, adaptive cruise control and SideGuard Assist – a system that detects pedestrians, cyclists and other obstacles down the truck's nearside when it is turning left – it was a clear choice for Cleary Bros Director, Brett Cleary.

"Cascadia is setting a new standard for safety and the rest will have to follow," he said.

"Safety is absolutely paramount for our company and there is nothing else out there that has this level of safety in a conventional truck."

The new Freightliner Cascadia 116 has been hauling sand and aggregate between Wollongong and Sydney, running at 57.5 tonnes with a quad dog under Performance Based Standards.

But as Cleary Bros General Manager Concrete and Transport, Steve Crandell, points out, it's not just the truck's impressive high-tech safety features that matter – the truck's sloping bonnet and optional wing-mounted side mirrors deliver superb driver vision, too.

"Our trucks operate in all types of areas where there can be a lot of traffic and pedestrians, so we need to do everything to ensure the safety of our driver and other members of the community," he says.

"The safety technology in Cascadia is way in front of what else is available."

Mr Crandell says the truck's 13-litre Detroit DD13 engine, with 505hp and 1850lb-ft, is handling the steep climbs around Wollongong with ease, while some of strain of the driving task is reduced by the truck's fully automated Daimler transmission.

"It has a good torque band and goes up Mount Ousley, the steepest hill around, with no problems at all," he says.

While the company says it's still early days as far as fuel economy data goes, Freightliner says the new Cascadia is delivering significant gains for operators around Australia. And it's a hit with drivers, too.

"Our driver appreciates the safety, and things like the adaptive cruise control, but the first thing he spoke about was the cabin layout and said was that everything he needed was within reach," says Mr Crandell.

And it's certainly hard to miss the truck, thanks to its striking paint scheme.

"We are getting lots of calls asking about it."

The truck was delivered to Cleary Bros by Stillwell Trucks in Sydney, which also recently supplied the firm with two CL112 10x4 agitators. Cleary Bros says those vehicles are also delivering the goods, so much so that it's ordered a third 10x4 agitator, which will sign on for the company in coming weeks.